The Relationship Between a Recession and Crime 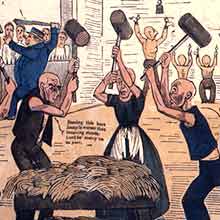 The UK, and much of the world is currently in recession. Crime is generally considered to rise during tough financial times, but in which ways and why?

As we know, unemployment increases dramatically during a recession. Businesses struggling or going under cause a spate of redundancies, meaning a large increase in unemployment. This inevitably leads to more cases of depression, which can lead to higher crime. The most obvious cases are drugs and alcohol. People suffering from depression often turn to drugs and alcohol for refuge. Increase in drug taking (a crime itself) leads to more drug related crime. Drug dealing will become more rife if demand is higher, and crime’s such as theft may be committed to feed drug habits. It is also more likely that people will commit crimes, such as those involving violence, if they are intoxicated by drugs or alcohol.

A recession leads to more debt. If people spiral into debt they are liable to become more desperate. This particularly increases crimes such as theft. People are more likely to steal so they can pay off their debts. They may also turn to other illegal ways to make money if they feel that there are no legitimate ways of earning.

Violence is another area that can increase during a recession. People are more liable to get angry when times are tough, and therefore are more likely to turn violent. People may be angry with their employer who has made them redundant, or the government because they don’t feel that they are being helped sufficiently, meaning they are generally more disgruntled with the world. People may also become more hostile towards each other. In particular those who are struggling may be angry towards those who are not. There has been a recent example of this in Ireland, where there were instances of violence towards some Romanian immigrants. The reason for this was attributed to some being angry that the immigrants had taken “their” jobs, although they were jobs local people hadn’t applied for at the time of the vacancies.

Family break ups are sometimes more likely to occur during a recession. Debt can cause stress within the family and lead to marriages breaking up. The break up of parents can have an effect on children. Although they mostly focus on those from low income one parent families, (usually where only one parent is financially responsible) statistics show that children from single parent families are 75% more likely to become a drug addict. They also show these children are 70% more likely to finish school without any qualifications. This is significant as a high percentage of crime is shown to be committed by those with a poor education.

There are many different aspects of a recession that can result in an increase in crime. Some are in obvious ways, such as theft to pay off debts, while others are less so involving a chain of events that may cause crime.